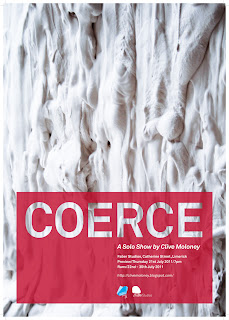 Clive Moloney’s current body of work deals with the concept of control. He illustrates this concept through the process of mould making and casting and attempting to dismantle or blur the boundaries between the mould and cast. Traditionally the mould and cast are seen as two separate entities, the mould being used to create the cast and then discarded. The process is conventionally used to replicate an object that already exists.

Moloney chooses to build his own moulds from plastic, wood, rubber bands and stone and often displayed them as an element of the finished work. The process plays with the mould and cast, creating a grey area in between. The artist uses plaster and sugar syrup as his casting materials.

The very structured, controlled, geometric shapes are allowed to spill into more abstract, organic forms. The artist’s attempts to control and coerce his materials (and their subsequent form) are in constant struggle with a willingness to let go and allow the materials to create their own forms.


Posted by faberstudios@gmail.com at 6:37 PM