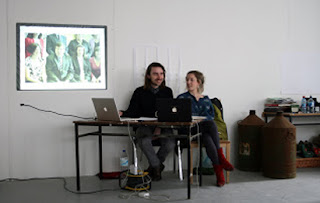 The Good Hatchery was founded in 2007 by five Sculpture graduates from The National College of Art and Design. Graduating in Dublin during the prosperous boom years, there was little chance of securing a studio space for anything less then you’re first born. So the group decided to focus on the finance aspect of art practice, or more to the point focus on how far one could get without any finance. The experiment to see if it could be done started with a search for a suitable space. Using the internet, they placed an ad on free cycle, looking for a suitable building to use as a studio. Eventually they received a genuine response from a woman in a rural part of Co. Offaly. They could have the building for free in exchange for them renovating it.
Both Carl and Ruth highlighted the importance of the internet in the success of The Good Hatchery. Although in an isolated part of the country, they still had the ability to stay connected with the art world in the larger cities. Everything used to build and renovate The Good Hatchery was sourced free and the work was done by themselves, using the internet again, to teach them the necessary construction skills. The pair mentioned the risk free element to the project. Because no one had invested any money and there were no overheads, if the project failed they would have only lost the time they put in.
Although initially five people were involved in the project, at the end of the first year three decided to leave. Now with just Ruth and Carl left, there was an opportunity to avail of the extra space left by the others departure. This led them to experiment with a residency program. Unsure of who would want to come to the middle of no where for four weeks they sent out a call for proposals. The fruition of this was they’re first residency ‘Sapphire Highway’. Three artists, Sinead Breathnach Cashell, Ronan Coughlan and Patrick Corcoran, were selected. The work produced engaged with the rural landscape and community in which the Good Hatchery is situated. The work exemplifies the freedom and spectrum of creative possibilities which the Good Hatchery offers. Work ranging from Cashell’s colourful and surreal inhabiting of ‘non spaces’ to Cocaran’s abandoned DVD’s, left to haunt the abandoned Briquette factory that is the subject of the film they hold. And Coughlin’s offer of a free day of labour for anyone who wanted it, ultimately became a humorous and futile effort to penetrate a closed rural community.
After building up an profile they began to be invited to curate exhibitions, one such exhibition was ‘Celestial Salt’ in which artists had to propose a piece of work that had previously be seen in a fine art context, but re-appropriate it in a rural landscape with no fine art infrastructure. The result was an impressive experiment in re-appropriation and re -evaluation of fine art interpretation. Raising questions about the fundamentals, such as why do artists create and would they make work even if it would never actually be seen. Isolated in rural landscapes, the art works are stripped back, free from the confines and contexts of fine art institutions, allowed to stand on their own. The absence of an audience transforms the works from art objects into abandoned artefacts lost in a wild expanse. This project and approach raises an interesting if not amusing notion. Concerning the geographical isolation of these art works, are they really more isolated then when they were shown in a fine art context. Arguably, galleries are equally as inaccessible as rural bog lands, if not physically, than psychologically, when we truly consider the demographic who visit them.
While it could have been seen as a risk, there is something tantalising about the idea of randomly coming across these art works. And one can only imagine the much debating among those who did and they’re, no doubt, endless and amusing theories of what and where these objects came from.
The Good Hatchery’s success is a result of resourcefulness and hard work. Both Ruth, Carl and the other founding members focus and determination has turned the Good Hatchery into impressive and enviable facility. It has also proven that contemporary art practice can flourish outside major cities, especially Dublin. In what sometimes can feel like a very centralised country, it is refreshing to have a creative space supporting emerging artists, that is free from the negative and often financial obstacles of more formal Fine Art Institutions.


Posted by faberstudios@gmail.com at 6:15 PM